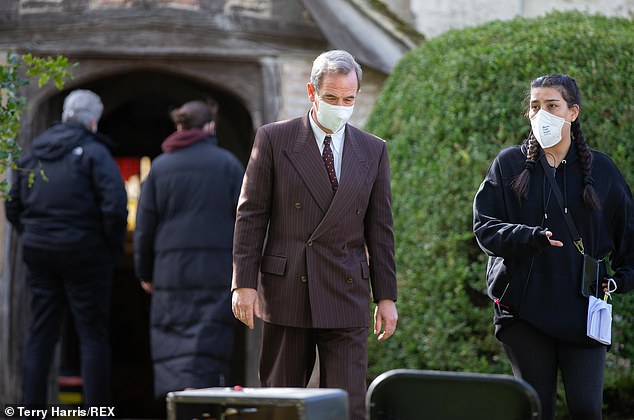 Robson Green recently admitted that having to wear a face mask between takes caused him to have his first-ever panic attack.

And Robson was seen removing his face covering so as to enjoy a sip of coffee on the set of Grantchester in Cambridge on Thursday.

The actor, 56, who plays DI Geordie Keating, sported a brown pinstripe suit as he continues filming scenes for series six of Grantchester.

Robson appeared in a reflective mood as he pulled down his mask while staring sombrely into the distance.

He continued to sip on his hot beverage as he walked about the set in between takes.

At one point, The Soldier Soldier star stopped to talk to a member of the crew as they waited on the set of the long-running 1950s-set detective series.

In January, Robson revealed that he became disorientated and his ‘heart rate went through the roof’ because he couldn’t see his co-stars’ expressions and process what was happening during rehearsals for the latest sixth season.

The star – who teams up with actor Tom Brittney, who plays Reverend Will Davenport, to solve crimes in the popular programme – said the coronavirus rules had really changed acting.

‘I’ve learnt I’m a very social person and that I like connecting to and being friendly with people. I’ve also learnt that when someone’s wearing a face mask I don’t get to see their personality,’ he said. ‘I need to see someone’s face. For the first time ever I had an anxiety attack – this was on the first day of rehearsals for the new series of Grantchester.

‘It was a really big scene with lots of words and interacting with Tom insights. It’s all about the interaction and working off the expression of the person you’re talking to – and with people wearing masks and not seeing their expressions it was really difficult.’

He said he found rehearsing with masks very strange and added: ‘I couldn’t process what was happening. I became really disorientated and my heart rate went through the roof.

‘Something I’m so used to doing – acting – had changed so much due to something completely beyond my control. I found rehearsing with masks very strange.’

The new series of Grantchester started filming in the Cambridgeshire village of the same name last autumn and the actors and film crew were all seen to be abiding by strict rules to prevent the spread of coronavirus on set, with a poster of instructions up and masks worn.

New instalments will be set in 1958, with the unlikely crime-fighting duo solving yet more cases. The first episode will see the pair attempting to unwind during a holiday camp – only to end up investigating a murder at the resort.

What sets out to be a fun-filled break for everyone is interrupted by a tragic death at the resort, with Geordie and Will left with no choice but to help out, as an investigation into the death begins.

As events unfold on the trip, there will be serious repercussions for the rest of the series.

This site is for entertainment purposes.

Get in touch if a credit source is missing.

Back to Top
Close